Men’s 100-metre world champion Christian Coleman was banned for two years on Tuesday and lost his chance to succeed Usain Bolt as the fastest man at the Olympic Games.

Track and field’s Athletics Integrity Unit said it banned the American sprinter for two years, until May 13, 2022, because of three violations of doping control rules.

Coleman missed two visits by sample collection officials and failed to file correct information on another occasion, all in 2019, the year he won his first world title.

Athletes face a two-year ban if they have three violations in a 12-month period.

“We see this case as involving behaviour by the athlete as very careless at best and reckless at worst,” the AIU’s three-member judging panel said in its published ruing. “The decision may be appealed to the Court of Arbitration for Sport.

The 24-year-old Coleman had been provisionally suspended from competition since May. Weeks later, details of his three so-called “whereabouts failures” were revealed.

Coleman, also a silver medallist in the 100 and 4×100 relay at the 2017 worlds, escaped suspension last year when the U.S. Anti-Doping Agency, after receiving guidance from the World Anti-Doping Agency on how to calculate the 12-month window for three missed tests, withdrew the charge weeks before the world championships.

The sprinter later demanded an apology from USADA, but two of those misses have now combined with the latest failure to result in a ban.

Andre De Grasse of Markham, Ont., also set a PB in the race at 9.90 to earn a bronze medal in his head-to-head matchup in the 100 against Coleman since the 2015 NCAA semifinals while Toronto native Aaron Brown finished eighth in 10.08. 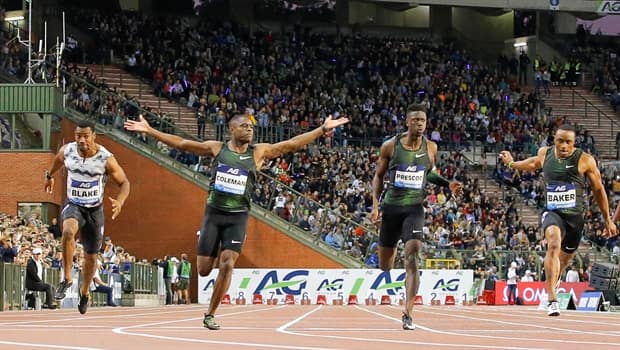 A day after the 100 final in Doha, a ‘sore’ Coleman pulled out of the 200 preliminaries, but a few days later he and three teammates blazed to the 4×100 relay title, clocking the second fastest time ever at 37.10 to end a 12-year gold-medal drought.

Those performances would establish him as favourite to win titles at the Tokyo Olympics, which was postponed in March and rescheduled to begin next July because of the coronavirus pandemic. Jamaican icon Bolt won the marquee 100 at the past three Summer Games.

According to World Athletics, American Jerome Young and Russia’s Anastasiya Kapachinskaya are two other sprinters that were disciplined after winning world championship gold.

In 2003, Young won the men’s 400 at worlds in Paris and barred for life by the U.S. Anti-Doping Agency in November 2004 following a second positive test for a banned drug. He was stripped of his world gold medal in February 2009.

Kapachinskaya was also victorious at 2003 worlds in the women’s 200 and later disqualified from competing in 2004, including the Athens Olympics, due to a doping offence.

In August 2016, she was also retroactively DQ’d and stripped of a 4×400 relay silver medal, along with her teammates, from the 2008 Summer Games in Beijing for testing positive for steroids in a doping sample reanalysis.

The judges said there was no suggestion Coleman ever took a banned substance.

However, even the panel noted Coleman was in a pool of top-level athletes targeted for no-notice testing since 2016 and “has received anti-doping education for a number of years.”

“The evidence indicated a complete failure to [comply with the rules] by the athlete,” the judges said.

Coleman previously wrote in his blog that his third and decisive whereabouts failure — on Dec. 9 last year — occurred when drug testers showed up at his residence while he was Christmas shopping.

Elite athletes are required to fill out a “whereabouts form” to make it possible for anti-doping authorities to carry out surprise testing outside of competition.

A violation means an athlete either did not fill out forms telling authorities where they could be found, or that they weren’t where they said they would be when testers arrived.