Nashville (7-6-7) is unbeaten in its last four games and moved into seventh place in the Eastern Conference standings. Montreal (7-12-2) has lost four of its last five games, and sits two points above the playoff line.

“We talked about it after every game. Once again, we didn’t cover the run,” said Impact coach Thierry Henry.

“We don’t shoot and we don’t cross the ball enough. We find ourselves in good situations, but we don’t shoot on goal. We have to congratulate Nashville, who played well. They were alert and their striker made the run and scored.” 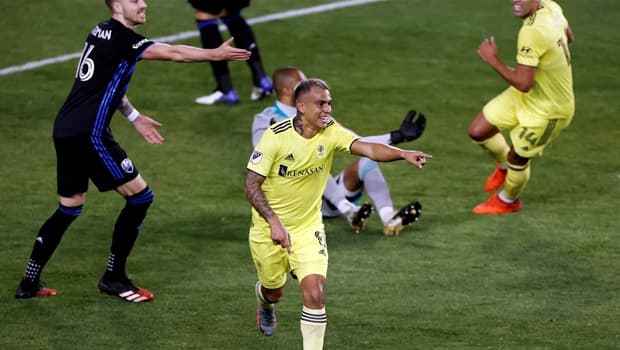 Leal scored his third goal this season. Alex Muyl was fouled near midfield and quickly got up to send a free kick past the defence for a calm finish by Leal.

Willis made two saves and moved ahead of Philadelphia’s Andre Blake for the MLS lead in shutouts.

“We did everything to comeback to the score after the mistake on their goal,” said Impact midfielder Samuel Piette. “We also lacked opportunism and didn’t create enough chances … It’s on us to show the passion and desire to try and keep our playoff position.”

Whitecaps kept off scoresheet by Sounders

The Seattle Sounders climbed back to the top of the standings with a 2-0 win over the Vancouver Whitecaps Tuesday.

The victory clinched a playoff spot for Seattle, the first team to cement a post-season berth in Major League Soccer’s Western Conference.

Raul Ruidiaz and Nicolas Lodeiro scored and had assists for the Sounders (10-4-5), while Nouhou Tolo and Yeimar Gomez also registered helpers. 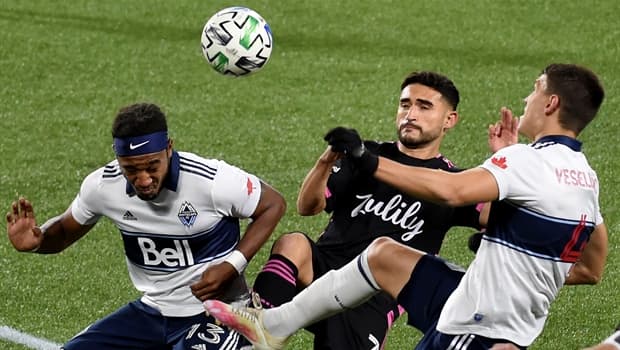 Seattle goalie Stefan Frei did not have to make a save to collect his sixth clean sheet of the season. Evan Bush stopped 2-of-4 on-target shots for the Whitecaps (8-13-0) who were playing at their temporary home in Portland.

Despite the final result, Vancouver was strong through the first half Tuesday, playing a high press that largely kept Seattle out of the penalty area.

The Sounders amped up their offence in the second half, putting away two goals in six minutes.

Ruidiaz opened the scoring the 54th minute, hammering in a cross from Tolo. The goal was called offside but went to video review, where referee Fotis Bazakos overturned the decision and confirmed the Sounders’ 1-0 lead.

Ruidiaz helped out six minutes later, getting around Vancouver defender Ranko Veselinovic and putting the ball at Lodeiro’s feet. Lodeiro cut back and popped a shot in past a diving Bush for his sixth goal of the year.

Vancouver’s best chance of the night came in the 80th minute when ‘Caps defender Ali Adnan tested Frei with a free kick. The Seattle netminder was forced to dive and direct the ball just wide of the post.

The Whitecaps will be back in action Sunday when they face the Portland Timbers.